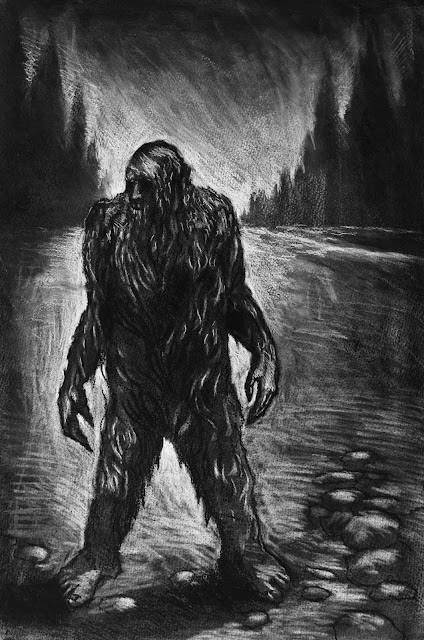 The Bigfoot interests me greatly. I see him as a rather gentle giant who would prefer to watch us from a distance. I tried to capture a sense of distance in his face. A Look that he knows so much more than us about nature and the cosmos. I feel hesitant to put him in under the title 'Monster' so if you read this Bigfoot, no offense!

Bigfoot, also known as sasquatch, is the name given to an ape-like creature that some people believe inhabits forests, mainly in the Pacific Northwest region of North America. Bigfoot is usually described as a large, hairy, bipedal humanoid. The term sasquatch is an anglicized derivative of the Halkomelem word sásq’ets.*

for my other art go to:
www.kainwhite.com
Posted by Kain at 22:13 No comments: 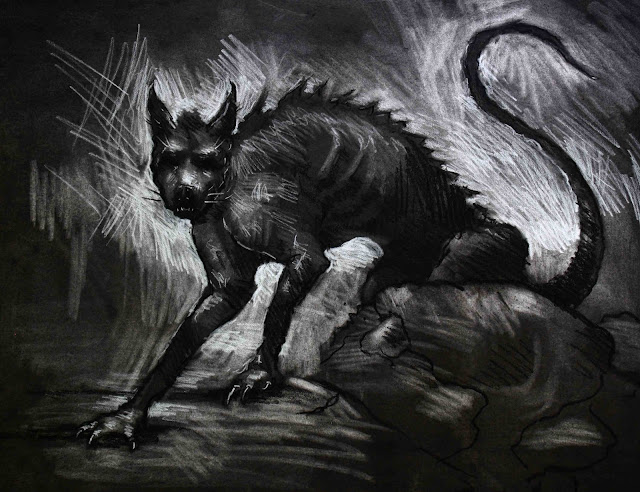 The first reported attacks occurred in March 1995 in Puerto Rico. In this attack, eight sheep were discovered dead, each with three puncture wounds in the chest area and completely drained of blood. A few months later, in August, an eyewitness, Madelyne Tolentino, reported seeing the creature in the Puerto Rican town of Canóvanas, when as many as 150 farm animals and pets were reportedly killed. In 1975, similar killings in the small town of Moca, were attributed to El Vampiro de Moca (The Vampire of Moca). Initially, it was suspected that the killings were committed by a Satanic cult; later more killings were reported around the island, and many farms reported loss of animal life. Each of the animals were reported to have had their bodies bled dry through a series of small circular incisions.

Physical descriptions of the creature vary. Eyewitness sightings have been claimed as early as 1995 in Puerto Rico, and have since been reported as far north as Maine, and as far south as Chile, and even being spotted outside the Americas in countries like Russia and The Philippines. It is supposedly a heavy creature, the size of a small bear, with a row of spines reaching from the neck to the base of the tail.
The most common description of chupacabras is a reptile-like creature, appearing to have leathery or scaly greenish-gray skin and sharp spines or quills running down its back. This form stands approximately 3 to 4 feet (1 to 1.2 m) high, and stands and hops in a similar fashion to a kangaroo. In at least one sighting, the creature was reported to hop 20 feet (6 m). This variety is said to have a dog or panther-like nose and face, a forked tongue, and large fangs. It is said to hiss and screech when alarmed, as well as leave behind a sulfuric stench. When it screeches, some reports assert that the chupacabras' eyes glow an unusual red which gives the witnesses nausea.
Another description of chupacabras, although not as common, describes a strange breed of wild dog. This form is mostly hairless and has a pronounced spinal ridge, unusually pronounced eye sockets, fangs, and claws. It is claimed that this breed might be an example of a dog-like reptile. Unlike conventional predators, the chupacabra is said to drain all of the animal's blood (and sometimes organs) usually through three holes in the shape of an upside-down triangle or through one or two holes. 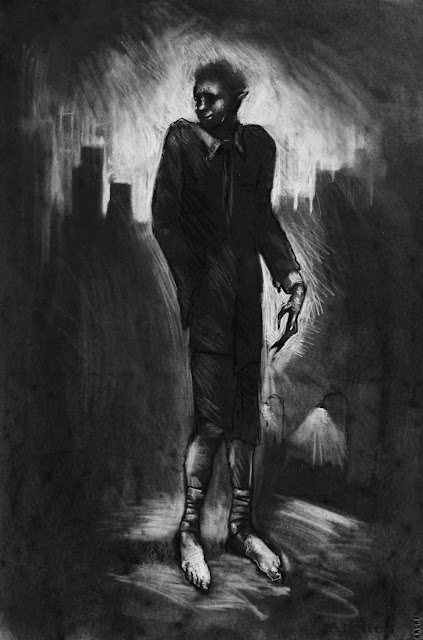 "Spring-heeled Jack, a startling 'jumping man' who terrorized Victorian Britain and could supposedly leap as high as 20 feet over walls and houses. The first alleged sighting of this strange leaping figure occurred in Londonin 1837. Another report from the same decade recorded the attack of a young girl named Polly Adams, who described her assailant's hands as iron claws, he noted. Other victims depicted Jack as a tall, lightly-built man with abnormal strength, pointed ears, and the ability to spit flames from his mouth. 1.

"The first alleged sightings of Spring-heeled Jack were made in London in 1837 and the last reported sighting is said in most of the secondary literature to have been made in Liverpool in 1904.
According to much later accounts, in October 1837, a girl by the name of Mary Stevens was walking to Lavender Hill, where she was working as a servant, after visiting her parents in Battersea. On her way through Clapham Common, a strange figure leapt at her from a dark alley. After immobilising her with a tight grip of his arms, he began to kiss her face, while ripping her clothes and touching her flesh with his claws, which were, according to her deposition, "cold and clammy as those of a corpse". In panic, the girl screamed, making the attacker quickly flee from the scene. The commotion brought several residents who immediately launched a search for the aggressor, who could not be found.
The next day, the leaping character is said to have chosen a very different victim near Mary Stevens' home, inaugurating a method that would reappear in later reports: he jumped in the way of a passing carriage, causing the coachman to lose control, crash, and severely injure himself. Several witnesses claimed that he escaped by jumping over a nine-foot-high wall while babbling with a high-pitched, ringing laughter.
Gradually, the news of the strange character spread, and soon the press and the public gave him a name: Spring-heeled Jack." 2.

Very good Link:
http://www.damninteresting.com/spring-heeled-jack/
Posted by Kain at 18:52 No comments: 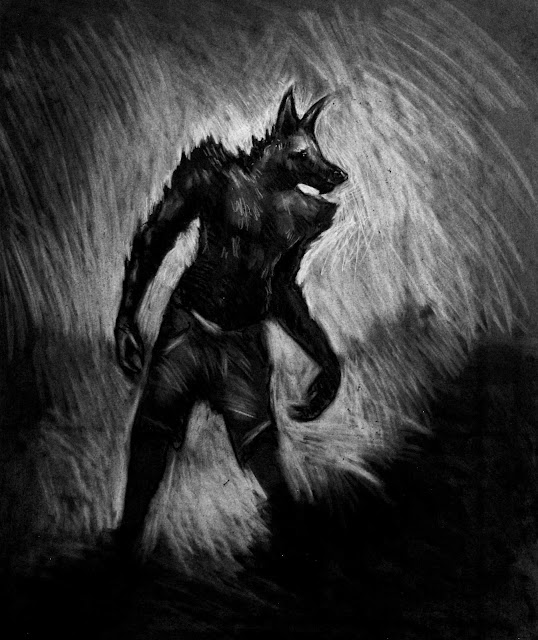 Some say the Dog Man is simply part of modern folk lore. Perhaps the people who say this have not witnessed this creature face to face? People who have been unlucky enough to be in it's vicinity are certain of what they saw!

The Dog Man can range from 5.5 feet to over 6 feet tall and has been known to kill livestock and attack people. They are sometimes spotted wearing dirty old clothes, of which are most likely stolen from clotheslines or perhaps even victims? Although the Dog Man looks like a Man. reports have been made that the Dog Man will run away if scared, and will whimper like his four legged brothers. Some say the Dog Man is simply a dog that may have taught itself to walk upright due to incurring an injury to one of its paws. So the jury is still out on what the Dog Man is.

Below are some pieces of information I have found on the Dog Man which may help you in your quest for truth.

"The first known sighting of the Michigan Dogman occurred in 1887 in Wexford County, when two lumberjacks saw a creature whom they described as having a man's body and a dog's head"1.

"Descriptions by witnesses of the Manwolf or Dogman have remained consistent over the years and across the US-- a 5-7 ft. tall creature that stands, walks or runs on its hind legs (although it can alternate between that and all fours), is covered with shaggy fur, and has a long snout, fangs, and pointed ears on top of its head, she detailed. Curiously, people often note that it has a jeering or sneering quality as though it's trying to scare them, but then quickly darts off into nearby cover. One witness, a man in Quebec province, said he was grazed by the fangs of a creature when it brushed past him, leaving him with a skin tear that required stitches."2.